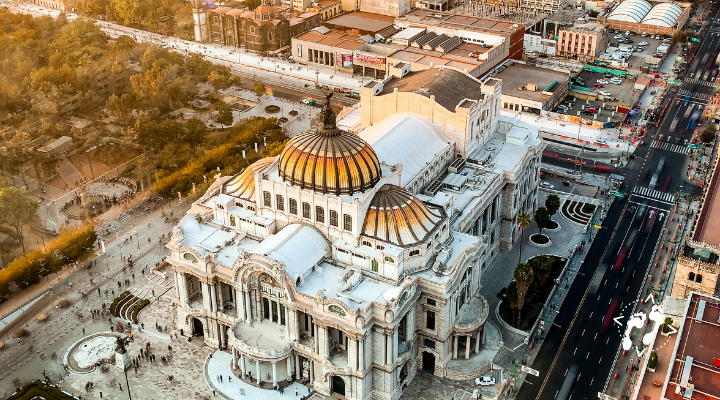 DAy 01 SUN. Mexico City.-
Arrival. Welcome to Mexico. Transfer to hotel and free time. Our guide will contact you late in the afternoon or provide information through the informative panels in the hotel reception area.-

DAY 02 MON. Mexico City.-
Today we have a fantastic day acquaint ourselves with Mexico. We include a sightseeing tour of the city. We will visit the Plaza of Three Cultures, and the historic centre in which the Zócalo (main square) and its Metropolitan Cathedral stand out, the main Aztec temple, Chapultepec Park, the “Paseo de la Reforma” Avenue and the other main avenues of this impressive city. At the end of the visit we travel to the BASILICA OF GUADALUPE, the most visited Catholic temple in the Americas where the Virgin of Guadalupe is found. There we will be able to explore the old basilica dating back to the 18th Century and also the modern temple. In the afternoon we travel to the neighbourhood of XOCHIMILCO, a wonderful place with its canals and semifloating gardens. Here we include a ride in a “trajinera”, one of the boats festooned with flowers. In the evening we include a transfer to the Plaza de GARIBALDI, with its many bars, restaurants and bars where tacos and tequila are served and the Mariachis sing. Dinner is included in a traditional restaurant.

DAY 03 TUE. Mexico City- Morelia- Janitzio Patzcuaro.-
We leave Mexico City, and amidst green countryside we enter the state of Michoacán. We travel to MORELIA, the splendid Michoacán capital whose centre, with its magnificent cathedral, was declared Unesco World Heritage. Time for lunch and a stroll in the centre. Then we will go on to the beautiful Lake Pátzcuaro, the heart of the Purépecha region. We embark and travel to the island of JANITZIO, where after our 25-minute crossing, we reach this picturesque village full of life and craft shops. After this, we see PATZCUARO, a pretty colonial village with its outstanding Basilica of Our Lady of Health and the house of the eleven courtyards which today is a craft centre. Night in this “magical village”.

DAY 04 WED. Patzcuaro- Chapala- Tlaquepaque- Guadalajara.-
We leave for the state of Jalisco. We see Lake Chapala, the largest natural lake in Mexico, surrounded by mountains. CHAPALA, time for a stroll and lunch in this small tourist city by the lake. Arrival in GUADALAJARA. The end of the afternoon, we include a transfer to the TLAQUEPAQUE district, with its picturesque streets full of shops and craftsmen. You can have dinner in “El Parían” a large square with many typical restaurants where there will be no lack of Mariachis.

DAY 05 THU. Guadalajara- Tequila- Guadalajara.-
In the morning we include a visit to Guadalajara, the modern metropolis with its colonial historic centre, its cathedral, its market, its Tapatía square. We will enter the Cabañas Hospice, declared Unesco World Heritage. After the visit, we will go on to the next town of TEQUILA, we include entrance to the MUNDO CUERVO distillery and will see how this famous Mexican drink is made (entrance and tasting included). After this, time for a stroll and lunch in the picturesque town of Tequila. After lunch, we return to Guadalajara.

DAY 06 FRI. Guadalajara- Guanajuato.-
We travel to the state of GUANAJUATO. Arrival at midday. In the afternoon we include a city tour of this very beautiful university city declared World Heritage, its steep slopes, its narrow streets, its churches, and we also include a cable car ride to admire the view from “el Pípila”.

DAY 07 SAT. Guanajuato- Dolores Hidalgo- San Miguel Allende- Atotonilco- Queretaro.-
Amidst the mountains, we will travel to DOLORES HIDALGO, the city that is the cradle of Mexican independence. Following this, we see SAN MIGUEL DE ALLENDE, a beautiful city with vice regal architecture and cobbled streets declared World Heritage. Time for a stroll. In the afternoon, we see the ATOTONILCO Sanctuary, known as the “Century of God and the Patria”, World Heritage (sometimes it will not be possible to visit the inside due to the retreats made there). We then come to QUERETARO, with its very beautiful colonial centre, its square of arms and its busy restaurants and pedestrian streets.

DAY 08 SUN. Queretaro- Teotihuacan- Mexico City.-
We travel to TEOTIHUACAN, in Náhuatl “the place where men become gods”, one of the most impressive cities in the ancient world. Here we admire the pyramids of the sun and the moon, entrance and tour. Continuation to MEXICO CITY, arrival at lunchtime.End of our services. Check the time of your flight in case you need an additional night.