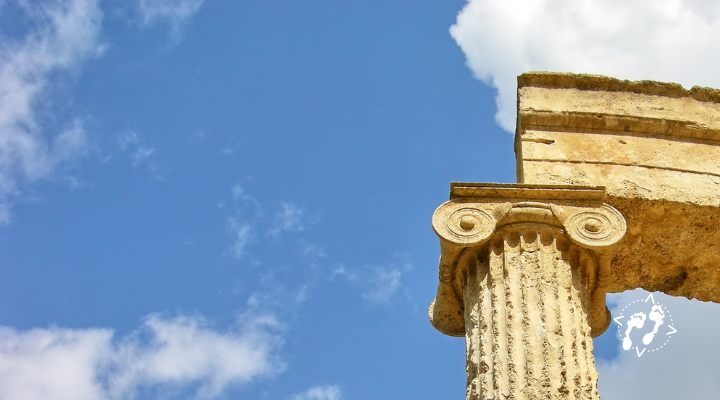 Gems From Greece and Turkey

DAY 01 WED. Athens.-
TODAY’S HIGHLIGHTS: Arrival. Transfer to the hotel.
Welcome to Europe!!! On arrival at the airport we shall be waiting to transfer you to the hotel. You can enjoy free time until your tour starts, information about the meeting place and start time can be found on the information boards in the hotel reception area.

DAY 02 THU. Athens.-
TODAY’SHIGHLIGHTS: City tour in Athens. Evening transfer.
We will enjoy a panoramic tour of the city with a local guide which includes the Presidential Palace, the Panathinaikos stadium where the first modern Olympic games were held, the national library, the bustling squares of the centre; the new neighbourhoods that emerged after the 2004 Olympic games. The tour will end at the Acropolis site (entry not included). In the evening we include a transfer to the PLAKA quarter, a place full of small Greek taverns where you can also enjoy this country´s folklore.

DAY 03 FRI. Athens – Corinth – Mycenae- Tripoli – Olympia.-
TODAY’S HIGHLIGHTS: Peloponnese region. Corinth canal. Mycenae archaeological site. Dinner included.
In the morning, we leave for the Peloponnese region. We make a stop at the CORINTH CANAL. After this, we have time in the immense fortress of ACCRA CORINTH (entrance included). At the top of the settlement are the foundations of what was a temple to Aphrodite. We go on to MYCENAE, a colossal citadel from the eighteenth century BC, the birthplace of the first European civilisation (entrance included). We stop in TRIPOLI, the provincial capital of a region that produces excellent wines. In the middle of the afternoon, we go on our way to OLYMPIA. Dinner included.

DAY 04 SAT. Olympia- Patras- Nafplio.-
TODAY’S HIGHLIGHTS: Olympia archaeological site. Patras Castle. Dinner included.
With a local guide, we visit OLYMPIA, where you can see the archaeological complex (entrance included) which was the birthplace of the Olympic Games in antiquity. After this, we cross the mountainous interior of the Peloponnese on our way to PATRAS. We include tickets to its powerful castle built in the 6th century, followed by time for lunch and to get to know Greece´s third largest city. We go on through inland Peloponnese to NAFPLIO, a delightful coastal city which takes its name from the Venetian Citadel and fortress. Dinner included.

DAY 05 SUN. Nafplio- Epidaurus- Poros- Aegina- Athens.-
TODAY’S HIGHLIGHTS: Beautiful stage by land and sea. Epidaurus theatre. Aegean Sea boat crossing.
Today we have a beautiful stage by land and sea. First of all we will see EPIDAURUS, its ancient theatre built 2400 ago is magnificently preserved and still used, and can accommodate up to 14,000 people (entrance included). After this, we go to the coast of the Aegean Sea to continue our trip on the water. A short boat crossing takes us to POROS, a charming place full of tourist life, where its ancient houses climb up to the clock tower and we have time for a stroll and lunch. After this we take the ferry to AEGINA, an island inhabited for more than 4000 years, where we can stroll around its ancient churches, its picturesque port and its typical districts of little houses. At around 18.00 we will go back on the ferry, which will take us back to ATHENS in around 45 minutes – Arrival in Piraeus. Note: The ferry timetable changes depending on the season and crossings are very limited between Poros and Aegina. In the low season, the island of Aegina may be replaced by the island of Hydra.

DAY 06 MON. Athens- Night on board.-
TODAY’S HIGHLIGHTS: Night on board to Rhodes.
Day at leisure. You can enjoy the charm of this city and explore and discover memorable places. At night we will transfer to the port of Pireo and embark on the night ferry, which has similar conditions to those of cruise ships, double berth accommodation. Night on board.

DAY 07 TUE. Rhodes- Marmaris.-
TODAY’S HIGHLIGHTS: City tour of Rhodes- ferry to Marmaris (Turkey). Dinner included.
Arrival in RHODES first thing in the morning. We start with a city tour of this incredible walled city and the old quarter, which bears the imprints of the different cultures that shaped it (Greek, Roman, Byzantine, Knights of Saint John, Ottoman, Italian). In the afternoon, around 16:00, we will embark on the express ferry to Turkey, the journey will last about an hour. MARMARIS, beautiful coastal touristic enclave with a castle, marina and fountains. Accommodation in the region of Marmaris. Dinner included. IMPORTANT NOTICE: The timetable for the ferry between Rhodes and Marmaris is frequently modified and doesn’t operate every day (except in the summer months), this part of the trip’s itinerary may have to be modified accordingly.

DAY 08 WED. Marmaris- Dalyan- Antalya.-
TODAY’S HIGHLIGHTS: Contrasts of landscapes. Boat trip. Dinnerincluded.
We leave for DALYAN, an incredible place by a navigable river. We include a two- hour boat trip to see LYCIA’S ROYAL TOMBS, and still on the boat, we go on to a large lake where we stop at the thermal springs. If you want, you can bathe in the warm waters or have a mud bath! Time for lunch in one of the numerous restaurants in DAYLAN by the river. Continuation to ANTALYA, we will make a brief visit to this coastal city of more than a million inhabitants, the door of Adrian, the Ottoman district and its great waterfall that falls straight into the sea. Dinner and accommodation.

DAY 09 THU. Antalya- Aspendos- Side- Karaman- Nigde.-
TODAY’S HIGHLIGHTS: Contrast of the Anatolian region between the coast and the high mountains. Dinnerincluded.
We leave Antalya for ASPENDOS, we visit the Roman theatre which many believe to be the best preserved in the world. After this in SIDE we can admire the Greek temple of Apollo by the sea. Time to stroll around the port and through its streets full of life. Amidst impressive countryside we cross the Taurus Mountains, their peaks of over 3,500 metres in height are snowcovered for a large part of the year. A stop in KARAMAN where we visit TARTAN EVI, an ancient Ottoman mansion. Continuation to the region of Cappadocia. NIGDE, dinner and accommodation. Note: Sometimes the Tartan Evi may be closed, in which case the visit would be replaced by another to a mansion of similar characteristics in Cappadocia.

DAY 10 FRI. Nigde- Cappadocia.-
TODAY’S HIGHLIGHTS: landscapes with spectacular shapes. Picturesque towns. Dinner included.
A full day in the fantastic region of CAPPADOCIA, with its lunar landscapes, its churches and troglodyte villages. We start by visiting GUMUSLER, an incredible seventh century underground monastery with maybe the best Byzantine frescoes in Turkey. In KAYMAKLI we will see the underground city that could house 30,000 people. We will visit the natural fortress of UCHISAR. After lunch, we will see the GOREME Valley with its open-air museum and its churches dug out of the rocks, entrance included. Hotel in AVANOS. Dinner included.

DAY 11 SAT. Cappadocia- Ihlara- Konya.-
TODAY’S HIGHLIGHTS: Ihlara Valley, Caravanserai, Konya. Dinner included.
At the far end of Cappadocia, we will visit the IHLARA Valley; known for the freshness of its waters, its churches and villages excavated in the rock. Then we continue our route, with a stop in an old CARAVANSERAI from the 13th Century before arriving in KONYA where we visit the Mausoleum of Mevlana. Here we will learn about the sect of the Dervishes (entrance included). Dinner included. At night, we suggest that you attend the dance performance of the whirling dervishes in the cultural centre.

DAY 12 SUN. Konya- Egridir- Pamukkale.-
TODAY’S HIGHLIGHTS: Fantastic Cotton Castle at the end of the day. Dinner included.
We take a scenic road between the lakes, and get to know EGRIDIR, a beautiful town next to a large lake, with its walls and mosques. There’s time to have lunch. We then continue to PAMUKKALE Hierapolis, whose calcareous waters have created the Cotton Castle (entrance included). Dinner included.

DAY 13 MON. Pamukkale- Ephesus- Kusadasi.-
TODAY’S HIGHLIGHTS: Ephesus. Dinner included.
We leave for EPHESUS, the best-preserved ancient city of Asia Minor; 2000 years ago it had a quarter of a million inhabitants. We see the house of the Virgin Mary, the Basilica of Saint John and the impressive ruins of Ephesus (entrance included). We then go on to KUSADASI, a popular coastal town with a lot of atmosphere, commercial life and a small castle. Dinner included.

DAY 14 TUE. Kusadasi- Izmir- Bursa- Istanbul.-
TODAY’S HIGHLIGHTS: Interior of Anatolia. Hanging bridges crossing the Sea of Marmara and the Bosphorus Strait.
We leave for the city with the fourth largest population in Turkey: IZMIR. We see the Church of Saint Polycarp, the oldest in the city, which reminds us of the importance of this area in early Christianity (entrance included). We then return to inland Turkey. Stop en route for lunch before reaching BURSA, the fourth largest city in Turkey, whose historic centre has been declared UNESCO World Heritage, with its traditional commercial districts, mosques, religious schools, public baths… The green mosque stands out. Arrival in ISTANBUL at the end of the day.

DAY 15 WED. Istanbul.-
TODAY’S HIGHLIGHTS: Sightseeing tour. Cable car to Pierre Loti viewpoint. Topkapi Palace. Evening transfer to Taksim.
A sightseeing tour of the city. We find ourselves in a city built in two continents. On our tour, we will include a cable car ride up to the Pierre Loti viewpoint and we will enter the Mosque of Suleyman the Magnificent (the largest in Istanbul). We will see the walls, the Golden Horn, the fishing district, and we will admire the exterior of Hagia Sofia. After the visit, we will offer tickets and a visit to the Top Kapi Palace, which was the administrative centre of the Ottoman Empire, with its magnificent courtyards and its pavilions. At the end of the afternoon we will provide a transfer to the Taksim neighbourhood, the most commercialised and lively area of the city. There will be time to dine in one of its many restaurants, and you can also take the old tram that crosses the area or go to see the nearby Galata Tower.

DAY 16 THU. Istanbul.-
TODAY’S HIGHLIGHTS: Boat trip on the Bosphorus.
Today we include a boat trip on the Bosphorus that will last about two hours. We will undertake the trip on a boat exclusively for Europamundo travellers. The Bosphorus is a strait that connects the Black Sea with the Sea of Marmara, which separates Istanbul into two parts: the European part and the Asian one. We will enjoy seeing the liveliness of the strait with its multitude of boats. We will pass under the two bridges that unite Europe and Asia and we will admire the palaces of the sultans, the typical wooden houses and the Ottoman villas. Free time.

DAY 17 FRI. Istanbul.-
After breakfast, end of our services.