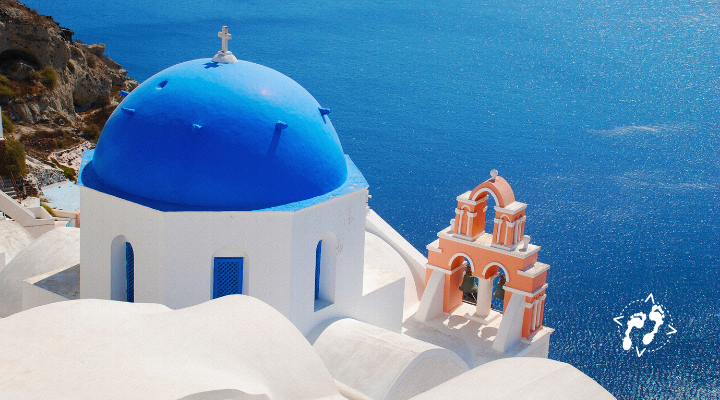 Have the chance to see EPIDAURUS, its ancient theatre built 2400 ago is magnificently preserved and still used, and can accommodate up to 14,000 people. Travel with this 8-day tour visiting Athens, Kamena, Vourla, Meteora, Kalabaka, Metsovo, Corfú, Lefkada, Cruise of the islands of the Ionian, Lefkada, Nafpaktos, Delphi, Olympia, Patras, Nafplio, Epidaurus, Poros, Aegina, Athens.

DAY 01 SUN. Athens.-
TODAY’S HIGHLIGHTS: Arrival. Transfer to the hotel.
Welcome to Europe!!! On arrival at the airport we shall be waiting to transfer you to the hotel. You can enjoy free time until your tour starts, information about the meeting place and start time can be found on the infor- mation boards in the hotel reception area.

DAY 02 MON. Athens.-
TODAY’S HIGHLIGHTS: City tour in Athens. Evening transfer.
We will enjoy a panoramic tour of the city with a local guide which includes the Presidential Palace, the Pana- thinaikos stadium where the first modern Olympic games were held, the national library, the bustling squares of the centre; the new neighbourhoods that emerged after the 2004 Olympic games. The tour will end at the Acropolis site (entry not included). In the evening we include a transfer to the PLAKA quarter, a place full of small Greek taverns where you can also enjoy this country´s folklore.

DAY 03 TUE. Athens- Kamena Vourla- Meteora Kalabaka.-
TODAY’S HIGHLIGHTS: Meteora Valley with entrance to a Monastery. Dinner included.
We set off in the early morning for the North of Greece. A stop at KAMENA VOURLA, a pretty tourist centre by the sea amidst magnificent countryside. Continuation northbound. We make a brief stop at the gorge where the battle of Thermopylae took place. KALABAKA, arrival in the early afternoon. We will visit the Valley of the METEORA, an impressive place declared UNESCO World Heritage. We will see the whole of the valley and will have the chance to enter one of the most famous monasteries (entrance included). Dinner and accommodation.

DAY 04 WED. Kalabaka- Metsovo- Corfú- Lefkada.-
TODAY’S HIGHLIGHTS: Corfu, ferry crossing. Dinner included.
An exciting stage full of beauty. We travel between mountains on our way to METSOVO. A coffee in this city that reminds us of the history and influence of the Slav and Turkish world in the north of Greece, before going on to IGUMENITSA, where we will embark for the very beautiful island of CORFU. A one and a half hour crossing of the waters of the Ionian Sea in front of the coast of Albania, we suggest lunch on board. On the island of Corfu, the Pearl of the Ionian Sea, we see its capital KERKIRA which preserves its Venetian style historic centre. We also see KANONI a beautiful Byzantine church perched on an island. We embark once more to return to continental Greece, before going on to LEFKADA, dinner included and accommodation in the picturesque capital of this small island connected to the continent by a bridge.

DAY 05 THU. Lefkada- Cruise of the islands of the Ionian- Lefkada.-
TODAY’S HIGHLIGHTS: Day cruise: Islands and Ionian Sea. Dinner included.
Today, the main feature is the sea and the islands of the Greek Ionian Sea. We embark on a day’s cruise that will take us to PORTO KATSIKI and its beautiful beach; CEPHALONIA, the largest island of the Ionian Sea, where we can stroll in the picturesque village of FISCARDO; ITHACA, the homeland of Ulysses and a chance to see the village of FRIKES; the boat then enters a hidden grotto in MEGANISI. Our boat also stops at SKORPIOS, the island of Onassis, where we can swim. A small lunch will be included on the cruise. Return to the port of Nydri where we disembark and return to our hotel in Lefkada; Dinner included. Note: on rare occasions, the route of the boat trip might be changed (or completely cancelled or the number of islands visited changed) for the weather or operational reasons.

DAY 06 FRI. Lefkada- Nafpaktos- Delphi- Olym- pia.-
TODAY’S HIGHLIGHTS: Archaeologica complex of Delphi. Dinner included.
We travel to the south of the Ionian Sea and the Gulf of Corinth. We see NAFPAKTOS, where its castle reminds us that this city is Lepanto, where the famous sea battle between Christians and Turks took place. Amidst very beautiful countryside we go on to DELPHI, where we arrive at the end of the morning. Entrance included to see this beautiful archaeological complex which overlooks the Golf of Corinth with incredible scenery. Time for lunch. We go on to the Peloponnese. Dinner included.

DAY 07 SAT. Olympia- Patras- Nafplio.-
TODAY’S HIGHLIGHTS: Olympia archaeological site. Patras Castle. Dinner included.
With a local guide, we visit OLYMPIA, where you can see the archaeological complex (entrance included) which was the birthplace of the Olympic Games in antiquity. After this, we cross the mountainous interior of the Pe- loponnese on our way to PATRAS. We include tickets to its powerful castle built in the 6th century, followed by time for lunch and to get to know Greece´s third largest city. We go on through inland Peloponnese to NAFPLIO, a delightful coastal city which takes its name from the Venetian Citadel and fortress. Dinner included.

DAY 08 SUN. Nafplio- Epidaurus- Poros- Aegina- Athens.-
TODAY’S HIGHLIGHTS: Beautiful stage by land and sea. Epidaurus theatre. Aegean Sea boat crossing.
Today we have a beautiful stage by land and sea. First of all we will see EPIDAURUS, its ancient theatre built 2400 ago is magnificently preserved and still used, and can accommodate up to 14,000 people (entrance included). After this, we go to the coast of the Aegean Sea to continue our trip on the water. A short boat crossing takes us to POROS, a charming place full of tourist life, where its ancient houses climb up to the clock tower and we have time for a stroll and lunch. After this we take the ferry to AEGINA, an island inhabited for more than 4000 years, where we can stroll around its ancient churches, its picturesque port and its typical districts of little houses. At around 18.00 we will go back on the ferry, which will take us back to ATHENS in around 45 minutes – Arrival in Piraeus. Note: The ferry timetable changes depending on the season and crossings are very limited between Poros and Aegina. In the low season, the island of Aegina may be replaced by the island of Hydra. End of our services. Check the time of your flight in case you need an additional night.