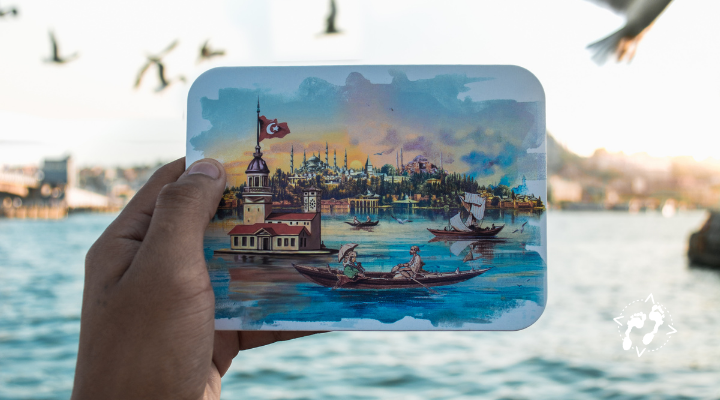 Take the ferry to AEGINA, an island inhabited for more than 4000 years, where you can stroll around its ancient churches, its picturesque port and its typical districts of little houses. It’s a 12-day tour visiting Istanbul, Bandirma, Ephesus, Kusadasi, Bodrum, Marmaris, Rhodes, Night on Board, Corinth, Mycenae, Tripoli, Olympia, Patras, Nafplio, Epidaurus, Poros, Aegina, Athens.

DAY 01 FRI. Istanbul.-
TODAY’S HIGHLIGHTS: Arrival. Transfer to the hotel.
Welcome to Europe!!! On arrival at the airport we shall be waiting to transfer you to the hotel. You can enjoy free time until your tour starts, information about the meeting place and start time can be found on the information boards in the hotel reception area.

DAY 02 SAT. Istanbul.-
TODAY’S HIGHLIGHTS: Sightseeing tour. Cable car to Pierre Loti viewpoint. Topkapi Palace. Evening transfer to Taksim.
A sightseeing tour of the city. We find ourselves in a city built in two continents. On our tour, we will include a cable car ride up to the Pierre Loti viewpoint and we will enter the Mosque of Suleyman the Magnificent (the largest in Istanbul). We will see the walls, the Golden Horn, the fishing district, and we will admire the exterior of Hagia Sofia. After the visit, we will offer tickets and a visit to the Top Kapi Palace, which was the administrative centre of the Ottoman Empire, with its magnificent courtyards and its pavilions.  At the end of the afternoon we will provide a transfer to the Taksim neighbourhood, the most commercialised and lively area of the city. There will be time to dine in one of its many restaurants, and you can also take the old tram that crosses the area or go to see the nearby Galata Tower.

DAY 03 SUN. Istanbul.-
TODAY’S HIGHLIGHTS: Boat trip on the Bosphorus.
Today we include a boat trip on the Bosphorus that will last about two hours. We will undertake the trip on a boat exclusively for Europamundo travellers. The Bosphorus is a strait that connects the Black Sea with the Sea of Marmara, which separates Istanbul into two parts: the European part and the Asian one. We will enjoy seeing the liveliness of the strait with its multitude of boats. We will pass under the two bridges that unite Europe and Asia and we will admire the palaces of the sultans, the typical wooden houses and the Ottoman villas. Free time.

DAY 04 MON. Istanbul- Bandirma- Ephesus- Kusadasi.-
TODAY’S HIGHLIGHTS: Ferry over the Marmara. Ephesus. Dinner included.
We leave early from Istanbul. We cross by fast ferry (variable schedules according to seasons and months) the Sea of Marmara, after about two hours of crossing, we arrive at the port of BANDIRMA (or Yalova according to schedules). We continue route through the interior of Turkey. At the beginning of the afternoon we arrive at EPHESUS, the best preserved ancient city of Asia Minor; 2000 years ago it had a quarter of a million inhabitants. We know Saint John´s Basilica, after it, the house of the Virgin Mary and the archaeological site (tickets included). We then continue to KUSADASI, a popular coastal town with a lot of atmosphere, commercial life and a small castle. Dinner and accommodation.

DAY 05 TUE. Kusadasi- Bodrum- Marmaris.-
TODAY’S HIGHLIGHTS: Views over the Aegean. Beautiful Bodrum. Dinner included.
We leave for Bodrum, a very beautiful fortified city of Greek origin. You can visit its castle, stroll through its streets full of life and tourism or go around its sports marina. After lunch, we go on our way to MARMARIS, another very beautiful coastal tourist enclave with its castle, its marina and its fountains. Dinner and accommodation.

DAY 06 WED. Marmaris- Rhodes.-
TODAY’S HIGHLIGHTS: Ferry to Rhodes (Greece), City tour of Rhodes.-
We will embark toward Greece first thing in the morning. Express ferry, the journey will last about an hour. Immigration checks. Arrival in Rhodes. City tour of this incredible walled city and the old quarter, which bears the imprints of the different cultures that shaped it (Greek, Roman, Byzantine, Knights of Saint John, Ottoman, Italian). Free afternoon. IMPORTANT NOTICE: The timetable for the ferry between Rhodes and Marmaris is frequently modified and doesn’t operate every day (except in the Summer months), this part of the trip’s itinerary may have to be modified accordingly.

DAY 07 THU. Rhodes- Night on Board.-
TODAY’S HIGHLIGHTS: Excursion in Rhodes. Night ferry to Athens.
Today, an excursion around the island of Rhodes is included. We will travel to FILERIMOS up on a hill where you will be able to visit its small monastery sitting amid amazing landscapes. Afterward we will travel to LINDOS where its medieval fort and Greek Acropolis own the sea. You will be able to take a stroll along the whitewashed and commercial downtown streets, rest up at one of its beaches or walk up (on a donkey if desired) to the Acropolis. At the cited time, we will meet up at the port of Rhodes and embark on the ferry to Athens.

DAY 08 FRI. Athens – Corinth – Mycenae- Tripoli – Olympia.-
TODAY’S HIGHLIGHTS: Peloponnese region. Corinth canal.
Mycenae archaeological site. Dinner included. Arrival first thing in the morning. We leave for the Peloponnese region. We make a stop at the CORINTH CANAL. After this, we have time in the immense fortress of ACCRA CORINTH (entrance included). At the top of the settlement are the foundations of what was a temple to Aphrodite. We go on to MYCENAE, a colossal citadel from the eighteenth century BC, the birthplace of the first European civilisation (entrance included). We stop in TRIPOLI, the provincial capital of a region that produces excellent wines. In the middle of the afternoon, we go on our way to OLYMPIA. Dinner included.

DAY 09 SAT. Olympia- Patras- Nafplio.-
TODAY’S HIGHLIGHTS: Olympia archaeological site. Patras Castle. Dinner included.
With a local guide, we visit OLYMPIA, where you can see the archaeological complex (entrance included) which was the birthplace of the Olympic Games in antiquity. After this, we cross the mountainous interior of the Peloponnese on our way to PATRAS. We include tickets to its powerful castle built in the 6th century, followed by time for lunch and to get to know Greece´s third largest city. We go on through inland Peloponnese to NAFPLIO, a delightful coastal city which takes its name from the Venetian Citadel and fortress. Dinner included.

DAY 10 SUN. Nafplio- Epidaurus- Poros- Aegina- Athens.-
TODAY’S HIGHLIGHTS: Beautiful stage by land and sea. Epidaurus theatre. Aegean Sea boat crossing.
Today we have a beautiful stage by land and sea. First of all we will see EPIDAURUS, its ancient theatre built 2400 ago is magnificently preserved and still used, and can accommodate up to 14,000 people (entrance included). After this, we go to the coast of the Aegean Sea to continue our trip on the water. A short boat crossing takes us to POROS, a charming place full of tourist life, where its ancient houses climb up to the clock tower and we have time for a stroll and lunch. After this we take the ferry to AEGINA, an island inhabited for more than 4000 years, where we can stroll around its ancient churches, its picturesque port and its typical districts of little houses. At around 18.00 we will go back on the ferry, which will take us back to ATHENS in around 45 minutes – Arrival in Piraeus. Note: The ferry timetable changes depending on the season and crossings are very limited between Poros and Aegina. In the low season, the island of Aegina may be replaced by the island of Hydra.

DAY 11 MON. Athens.-
TODAY’S HIGHLIGHTS: City tour in Athens. Evening transfer.
We will enjoy a panoramic tour of the city with a local guide which includes the Presidential Palace, the anathinaikos stadium where the first modern Olympic games were held, the national library, the bustling squares of the centre; the new neighbourhoods that emerged after the 2004 Olympic games. The tour will end at the Acropolis site (entry not included). In the evening we include a transfer to the PLAKA quarter, a place full of small Greek taverns where you can also enjoy this country´s folklore.

DAY 12 TUE. Athens.-
After breakfast, end of our services.