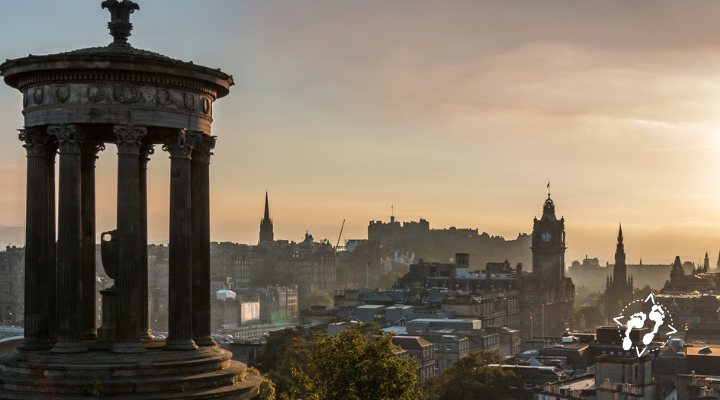 Stop at WALLACE Monument. You will trek the trail that goes to the foot of the tower which was built in memory of William Wallace, a 13th century Scottish military hero who became famous thanks to the film Braveheart. A 6 days tour visiting Edinburgh, Stirling, Pitlochry, Blair Castle, Inverness, Eilean Castle, Fort Augustus, Loch Ness, Urquhart Castle, Fort William, Inveraray, Loch, Lomond, Glasgow.

DAY 01 FRI. Edinburgh.-
TODAY’S HIGHLIGHTS: Sightseeing tour.
Welcome to Scotland. Welcome to EDINBURGH. Transfer to the hotel. At 13.00 (approximate time) sightseeing tour with a local guide to the Scotland’s capital city and one of the most active cities in Northern Europe. Its monumental centre has been declared a UNESCO World Heritage Site. Its castle overlooks the city, its steep streets and its parks.

DAY 02 SAT. Edinburgh.-
TODAY’S HIGHLIGHTS: Free day in Edinburg.
Free day. You can enjoy the charm of this city and explore and discover memorable places.

DAY 03 SUN. Edinburgh- Stirling- Pitlochry- Blair Castle- Inverness.-
TODAY’S HIGHLIGHTS: Traditional whisky distillery in Pitlochry. Blair Castle. Dinner included.
We will depart for northern Scotland. We will visit STIRLING and its amazing historic centre overlooked by its large castle which sits atop an intrusive crag. We will also stop at WALLACE Monument. We will trek the trail that goes to the foot of the tower (ticket not included) which was built in memory of William Wallace, a 13th century Scottish military hero who became famous thanks to the film Braveheart. Afterwards, we will continue north to PITLOCHRY, a picturesque town where we know a traditional whisky distillery, Blair Athol, where Bell´s is produced. Lunchtime. Afterwards, we will enter (ticket included) BLAIR CASTLE and its impressive gardens. We will continue north. Arrival in INVERNESS late in the afternoon. A seaside town quite close to Loch Ness. Dinner included. Note: The hotel network in northern Scotland is quite limited. For some tours (normally in the month of August), we may offer ac- commodation in towns around Inverness.

DAY 04 MON. Inverness- Eilean Castle- Fort Augustus- Loch Ness- Urquhart Castle- Inverness.-
TODAY’SHIGHLIGHTS: Beautiful landscapes from Northern Scotland, Eilean Donan Castle, Boattourin Loch Ness. Dinnerincluded.
We will enjoy a stage full of excitement amid quite beautiful landscapes, forests, lakes, deserted lands and fjords from northern Scotland. We will visit the fascinating EILEAN DONAN CASTLE. Which is quite picturesque and is located over the fjord’s waters (ticket included). Afterwards, we will travel to FORT AUGUSTUS where we will visit its sluice gate system. Time for lunch and a stroll. We will resume our trip to LOCH NESS in the afternoon. We include a boat tour around the lake’s dark waters, after offering tickets to enter URQUHART medieval castle. Dinner and sojourn in INVERNESS.

DAY 05 TUE. Inverness- Fort William- Inveraray- Loch Lomond- Glasgow.-
TODAY’S HIGHLIGHTS: Beautiful landscapes of Northern Scotland.
We will continue enjoying a stage with gorgeous landscapes. We will make a brief stop in SPEAN BRIDGE to visit a monument that speaks about the Second World War. We will later stop in FORT WILLIAM, a tourist centre at the foot of Ben Nevis, the highest summit in the United Kingdom. We will go by KILCHURN Castle, which displays its beautiful ruins right by a dark lake. INVERARAY, a quite picturesque historic village by Loch Fyne with a large castle and quiet streets. Lunch- time. We will return contouring Loch Lomond, one of the most popular lakes in Scotland. Time for a stroll around BALLOCH, the liveliest town on its banks. Arrival in GLASGOW at mid-afternoon. Time for a stroll around the centre of this lively city.

DAY 06 WED. Glasgow.-
After breakfast, end of our services.